When there is more than one performance standard for an event form, you can choose which standard to view using the Compare To feature located on the reports tool sidebar and in the history header menu. 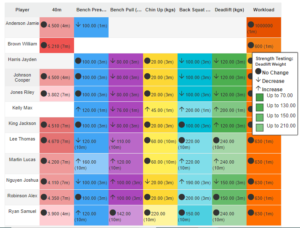 This example shows a report run on a wellness form for the Fusion Sport All Stars. The variables displayed in this report have had a performance standard applied to them; the standards are visible as the background colouring of each variable. The performance standard applies colours based on the field’s current value. You will notice that many of the athletes are displaying changes in their Bench Pull results, but no change in 40m Sprint times.